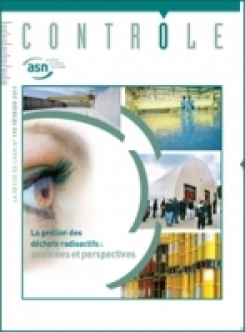 In July 2005, number 165 of Contrôle magazine was devoted to the management of radioactive waste in France. It was an opportunity for the various stakeholders involved to have their say, nearly 15 years after the 30th December 1991 Act, known as the "Bataille Act", and a few months prior to the Parliamentary debate of a radioactive waste management bill taking account of scientific and technical knowledge progress and which was to lead to the Act of 28th June 2006. That issue also came out on the eve of the public debate held from September 2005 to January 2006 on the subject of radioactive waste management, more particularly high and intermediate level, long-lived waste, with the aim both of informing the public, but also giving them an opportunity to express their opinion on this topic.

Six years later, many changes have taken place in the field of radioactive waste management. First of all, at a legislative level, planning Act 2006-739 of 28th June 2006 on the sustainable management of radioactive materials and waste, following on from the considerable work done jointly with the French Parliamentary Office for the evaluation of scientific and technological choices, confirmed the areas of research and set a new time-frame. Act 2006-686 of 13th June 2006 on transparency and security in the nuclear field confirmed ASN’s role as regulator of nuclear installations. It also set up the High Commission for transparency and information on nuclear safety, which plays an essential role in this field with regard to waste management.

Concerning the projects for disposal of high and intermediate level, long-lived waste, or low-level long-lived waste, the process to identify sites continues, even if the road ahead is today still a long one. Much has been learned from the progress made, in particular in the public sector, thus demonstrating the decisive role of the consultation process, but also the complexity and fundamental nature of the research aimed at ensuring the greatest possible safety and security.

Finally, in recent years, two versions of the National radioactive materials and waste management plan (PNGMDR) have been drafted. This tool was created more than ten years ago, at the initiative of ASN, which worked closely on it with the Directorate General for the Energy and the Climate. The PNGMDR is today essential in providing a clear strategy and roadmap for management of all radioactive materials and waste. Together with the set of legal texts already mentioned and a dedicated radioactive waste agency (ANDRA), the PNGMDR constitutes the third pillar of the French radioactive waste management system.

The past six years have already seen a number of major steps and the next few years will also be marked by significant milestones: organisation of the public debate prior to submission of the authorisation application for a deep geological repository for high and intermediate level long-lived waste, then the review procedure for the repository creation application; resumption of research into siting of the low-level long-lived waste repository; continued work by the pluralistic group in charge of drafting the PNGMDR, taking full advantage of the feedback from implementation of the previous plans.

Finally, the proposed directive for radioactive waste and spent fuel management, adopted in early November 2010 by the European Commission, made this subject one of the priority Community projects. ASN considers this to be a very real step forward and has been heavily involved in the preparatory work. The discussions now under way should lead to the adoption of a directive within the next few months, thus giving the Member States a common framework enhancing the provisions of the nuclear safety directive adopted in 2009. As borne out by the presentation of the advances made in recent years, the conditions in which radioactive waste is managed are therefore in many respects very different from the situation in 2005. There is however one constant factor in this constantly changing picture: now as six years ago, radioactive waste management remains the principal area of concern for the French population when talking about nuclear power. ASN therefore strives to adapt its actions to these particular concerns and, alongside the other stakeholders involved, is helping to provide the population with accurate information about radioactive waste management, but is also devoting the greatest possible attention to measures that could be taken to improve participation by the bodies representing civil society.

Finally, I would like to welcome two new commissioners, Jean-Jacques Dumont and Philippe Jamet, appointed by the President of the Republic and the President of the Senate respectively. For the next six years, they will replace Marc Sanson and Jean-Rémi Gouze, whose mandates came to an end on 12th November 2010.