Contrôle review No. 189 - The construction of a European nuclear safety and radiation protection area 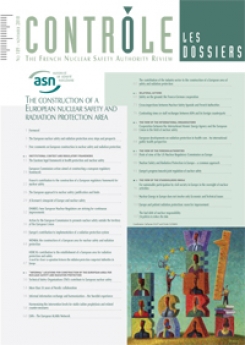 One year after the adoption of a European Directive on nuclear safety, a European area for nuclear safety and radiation protection is more and more taking shape. Contrôle obviously had to produce an issue on such an important topic.

The French Nuclear Safety Authority (ASN) has always been very keen on pursuing an international policy in its activities. Actually, article 9 of the Nuclear Transparency and Security Act (Loi TSN), which describes the ASN prerogatives in international relations, has structured a “can-do” policy. It is confirmed by the very strong ASN involvement for many years in such international organizations as IAEA and NEA and in European forums, in the extent of relations established with the foreign safety Authorities or its involvement in the creation and operation of structures like WENRA or MDEP (Multinational Design Evaluation Programme).

Europe holds a special place in ASN international policy and we shall look at it from three complementary angles:

These three European dimensions interact and help construct a “European area for nuclear safety and radiological protection”. They can none of them replace the other, they exist side by side and each one helps developing this area. This complex, dynamic and efficient process has no international equivalent.

For many years, ASN has been very keen on building a Europe of nuclear safety and radiation protection and has supported efforts vigorously. Under its bilateral relations, of course, but also in setting up regulators networks. Everyone is well aware of the part played by the Chairman of ASN, André-Claude Lacoste, along with other European regulators, in creating WENRA in the late 1990s, the constant involvement of ASN in pursuing its work and the more recent ASN support for the setting up of HERCA.

ASN is also very much involved in such community forums as ENSREG (European Nuclear Safety Regulators’ Group) and committees of experts advising the Commission on the application of the Euratom Treaty.

In this respect, in close cooperation with the French authorities and in constant dialogue with the nuclear safety Authorities of the 27 Member States and with the European Commission, it has thrown all its weight behind adopting a directive on the safety of nuclear installations in 2009.

The adoption of this directive is of prime importance, for several reasons.

Firstly, it forms part of the community legislation binding the provisions of the Convention on Nuclear Safety, something totally new, which naturally applies to all current EU Member States and which will also be mandatory for any new candidate for accession to the EU. It highlights especially the independence of safety Authorities, the duties of nuclear power plant operators and the necessary transparency of the information provided to the public.

It also has the immense value of anchoring Euratom competences on nuclear safety in a legislative act, thereby supplementing an elaborate legal framework for radiation protection.

Lastly, and possibly most importantly, it has created in Europe a consensus on the need to set up at community level a robust regulatory framework around the operation of nuclear power.

ASN believes that this consensus, which has to be preserved, must lead to rapid adoption of a directive on the safe management of radioactive waste and spent fuel, by “transposing” this time the provisions of the Joint Convention into community law. It also opens up prospects for working, still at community level, on new topics, for example relating to transparency or safety objectives of the new reactors. Under this last theme, it would be odd for the EU, the leading political “area” in the world to have made the IAEA’s safety fundamentals mandatory, not to be also in the front line on the expected safety requirements for reactors which will be constructed in Europe.

ASN will also pay special attention to the Commission’s future initiatives on upcoming basic standards for radiation protection or the security of radioisotope supplies in Europe.

Building this European area for nuclear safety and radiation protection is just like bulding Europe itself - at times it has stuttered badly, at others it has all of a sudden gained momentum. ASN will continue to apply itself to maintaining the current dynamics.