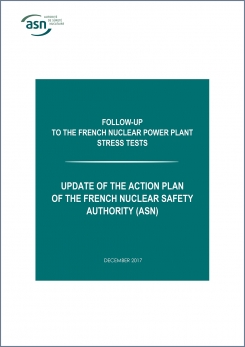 One year after the Fukushima Daiichi nuclear power plant accident, a joint statement by ENSREG and the European Commission concluded, on 26 April 2012, the stress tests conducted on the European nuclear power plants (NPPs). This statement emphasized the need to implement an overall action plan to ensure that these stress tests would be followed by safety improvement measures implemented in a consistent manner in each country.

The ENSREG global action plan required the nuclear safety regulator of each member country to publish a national action plan by the end of 2012. In December 2012, ASN published the action plan for France. The national action plans then underwent a peer review which concluded with a seminar organized by ENSREG in Brussels in 2013 and with an update in 2014 followed by a new cross-review in 2015.

In this context, this national assessment report provides the second update of the national action plan (NAcP) for France. It has been submitted in due time to ENSREG and to the European Commission for publication on the ENSREG website (final deadline: end of 2017).