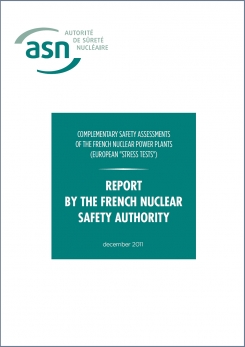 On 26th April 2012, one year after the Fukushima disaster, a joint declaration by ENSREG, a grouping of the European national safety regulators, and the European Commission, concluded the stress tests exercise on the European NPPs. This declaration underlined the need to implement a general action plan to ensure that these stress tests are followed by national-level measures to improve safety and that these measures are implemented in a consistent manner.

The conclusions of the European Council of 28th and 29th June 2012 confirmed their desire to see such an action plan come about.

This process took place under the auspices of ENSREG and the European Commission, which, on 28th May 2013, adopted a report on the follow-up of the actions initiated further to the Fukushima accident.

This report is the result of a peer review of the national action plans prepared by the nuclear safety regulators of the 17 participating countries. This review, which took place between January and April 2013, involved experts from 24 States and from the European Commission and concluded with a seminar organised by ENSREG which brought together representatives of the European safety regulators in Brussels, from 22nd to 26th April 2013. During the seminar, each safety regulator presented its national action plan and answered questions from its counterparts and from the public.

The ENSREG press release on the publication of its report is available on the ENSREG website. With regard to France, this report in particular underlines the exhaustive nature of the action plan presented, the importance that ASN attaches to transparency in the stress tests process, the ambitious nature of the content and of the deadlines for implementation of the measures to improve NPP safety decided on further to the Fukushima accident, as well as the consideration given to organisational and human factors and to the use of subcontracting.

The report underlines the importance of improving the venting-filtrationdevice on the containments of the existing reactors, a subject on which ASN will issue a position statement once it has analysed the reports it is scheduled to receive from EDF before the end of the year.