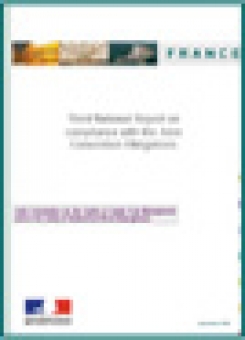 The Joint Convention on the safety of spent fuel management and on the safety of radioactive waste management is supplementing the Convention on Nuclear Safety. It was approved by France on February 22, 2000 and it entered into force on June 18, 2001. This Convention obliges each Contracting Party to present at the review meetings (every three years) a report on the way in which it implements the obligations of the Convention. The French Nuclear Safety Authority ensured the co-ordination of this report, with contributions from other regulators and nuclear operators. It has been submitted to questions and presented to the peers in Vienna.

The review meeting of the Joint Convention convened from May 15 to 24, 2006 at the IAEA headquarters under the presidency of André-Claude Lacoste. Forty one countries are contracting parties to this convention, i.e. all the major nuclear countries except India, Pakistan and South Africa. It is to be noted, that between 2003 and 2006, 8 new countries have ratified this convention, among them China and Russia.

The second report was the subject of 181 questions