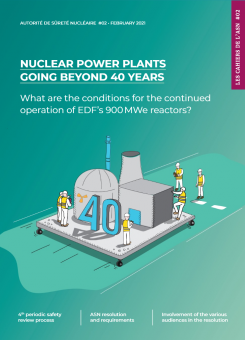 EDF’s 32 reactors of 900MWe are the oldest reactors in operation in France. After 40 years of service, can their continued operation be considered and under what conditions?

As the operator of its reactors, EDF must implement programmes for the inspection and improvement of the safety of its facilities.

As the independent Authority tasked with the oversight of nuclear safety, ASN is responsible for determining the conditions for their continued operation.

In the following pages, ASN reports on its conclusions and the resolution it has taken for all the 900MWe reactors in service, after completing a rigorous review and consultation process.