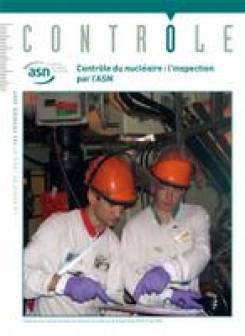 On behalf of the State, the ASN's inspectors perform stringent inspections to protect workers, patients, the public and the environment from hazards linked to nuclear activities.

Nearly 2000 inspections shall be performed by ASN agents in France in 2009. Over 200 of the ASN's 450 agents are certified to perform inspections. These figures clearly show the importance that ASN places on this monitoring mission on site.

Indeed, the inspection, in conjunction to ASN's other duties, is the guarantee of the effectiveness and credibility of the whole system of nuclear safety and radiation protection monitoring in France. It ensures that parties responsible for nuclear activities fulfil their primary responsibility with regards to nuclear safety and radiation protection. It is inseparable from all processes of regulatory imposition or activity authorisation, is a preliminary to any sanctions and, in a practical manner, permits an account of the ASN's activity to be given.

Since 2002 and the last issue of Contrôle devoted to this subject, ASN has considerably developed its inspection activities.
With the extension of its duties to include radiation protection, ASN has entered new fields, particularly monitoring medical applications of ionising radiation. Today, just over two years after the nomination of the first radiation protection inspectors, the indisputable position of ANS in all areas of radiation protection means the path we have followed in this sensitive area can be measured.

As part of this process and for the new areas, ASN has drawn on its fundamental values: competence, independence, rigour and transparency.
The TSN law, which created ASN in 2006, specified the framework of the inspection and considerably strengthened the powers of inspectors by granting them police powers or sanction powers which increase their ability to enforce regulations.

Finally, ASN has developed its relationships with other monitoring bodies and other parties involved in health and work fields, to strengthen the coherence of the State's action in the field of inspection.

ASN has also reinforced its international openness in areas linked to inspection activities in order to share experience and practices of other nuclear regulatory bodies. Thus, ASN and some of its foreign counterparts make inspectors available to each other or carry out joint inspections.

In the years ahead, ASN must consolidate these advances but also enter new territory. Thus, in the area of source security, an area which should be entrusted to it, ASN should put in place monitoring practicalities, and acquire new skills and new practices. A new challenge for the teams of the “nuclear police force”…