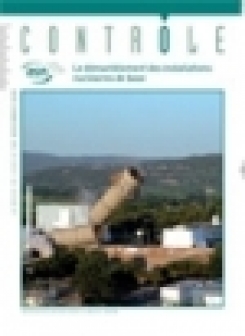 Many nuclear facilities were built in the 1960s and 1970s. Consequently, many of them have entered or are about to enter the dismantling and decommissioning phase. In recent years, dismantling operations have increased to an industrial scale and the technical and regulatory framework has been revised in depth to allow for this evolution. The laws voted in 2006 governing nuclear activity (Act on Transparency and Security in the Nuclear Field of June 13 2006 and the Planning Act of 28 June 2006 on the Sustainable Management of Radioactive Materials and Waste) now provide a coherent global framework for the dismantling of nuclear facilities.

In this context, in 2008, the ASN wanted to submit its policy about the decommissioning of nuclear facilities to a debate. policy, ASN's policy re-asserts that the immediate decommissioning strategy (no waiting period after final shutdown) should be the reference strategy for French nuclear operators. In accordance with new regulations, ASN stresses the need to inform the public before the beginning of dismantling operations, during the operations and before the restricted or unrestricted release of sites or facilities. Regarding the end-state, ASN recommends the implementation of complete clean up methodologies that aim to remove any dangerous materials from the facilities.

ASN policy about the decommissioning of nuclear facilities has been the subject of widespread consultation. First, ASN has consulted the parties involved, as it has always done. But ASN has also allowed anyone interested to offer his comments on the policy via its website. The number of comments received from Internet users illustrates the fact that decommissioning is a matter of interest. ASN has also suggested to the “High Committee for transparency and information on nuclear security”, which was set up in June 2008, to take an interest in decommissioning, and the High Committee will be doing so soon. Five years after the last issue of Contrôle dedicated to the subject, during the current debate I wanted to take a look at where we were with various aspects of the decommissioning of nuclear facilities in a new issue of Contrôle.

ASN policy regarding the decommissioning of nuclear facilities, which arose out of this debate and which will be published shortly, along with the current regulations which were largely renovated in 2006, should help us to face up to the challenges of the major decommissioning programmes to come, which include the first-generation EDF reactors, one of the reprocessing plants operated by AREVA on the La Hague site and the two CEA sites which are currently undergoing total denuclearisation.