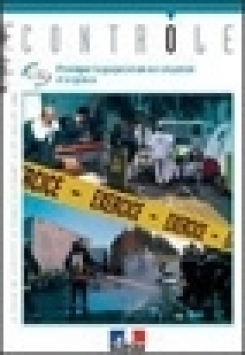 With respect to high-risk activities, the authorities have a major responsibility to protect the citizen. How do they perform this role in the event of an accident involving ionising radiation? In 2000, issue no. 132 of Contrôle focused on emergency situations. It stressed the importance of emergency exercises in enhancing safety. Concerning these exercises, Contrôle underlined the need to avoid the pitfalls of routine, leading to blind acceptance of the way in which nuclear emergencies are managed. Since 2002, the responsibilities of the Nuclear Safety Authority (ASN) have been broadened to take in radiation protection. As a result of the nuclear transparency and safety law of 13 June 2006, the ASN is about to become an independent administrative authority and will play a greater role in assisting the government in the event of a radiological emergency liable to jeopardise human health and the environment. In 2005, France made a major effort to update its entire emergency management system. Far from resting on their laurels, the response organisations gradually adapted to deal not only with a nuclear emergency, but more generally with any radiological emergency situation. In this issue of Contrôle, I therefore wished to take a look at the current organisation of radiological emergency management in France and give the various stakeholders concerned an opportunity to express themselves. For more than 20 years, the authorities and nuclear licensees have been developing a safety culture. This approach is now gradually encompassing small-scale nuclear facilities. Learning lessons from experience feedback is a means of improving the response organisation, the working methods and the facilities, in order to minimise the risk of an accident occurring. However, it is also the duty of the licensees and authorities to plan for and organise the response they would have to implement in the case of an event liable to lead to a radiological emergency. The Three Mile Island accident in 1979 and the Chernobyl disaster in 1986 both showed that a nuclear accident was not impossible, that preparation has to be made for it and that it must be possible to react in order to minimise the consequences for the public and the environment. As head of the ASN, I consider that in France management of radiological emergency situations must be based on a robust policy, on regularly tested emergency plans and on players who are well-trained. Our level of preparation therefore enabled us to deal with events which required activation of our emergency response organisation, in particular during the severe storm of 1999. I also think that the preventive distribution of stable iodine tablets to the populations concerned is particularly appropriate and that the interest in emergency management organisation and the involvement by the prefects, elected officials and nuclear licensee management at the highest level is both positive and necessary. However, progress is still required in two areas, post-accident situations and joint management of transboundary problems. The Government gave the ASN the task of “establishing the framework, defining, reparing and implementing the steps necessary for responding to a post-accident situation”. This collective work was started, with the aim of reaching a final policy text by mid-2007. An issue of Contrôle will in the near future be devoted to management of the consequences of an accident, the post-accident phase. Although emergency situation management methods are shared worldwide, and even if information exchange processes have been set up between authorities for use in the event of an emergency, it would seem that actual technical implementation relies on differing practices leading to incomprehension and confusion in the border areas, with regard to aspects such as the countermeasures perimeter and methods for dispensing stable iodine in the event of a nuclear accident, etc. On all the subjects concerning emergency situations, I aim to ensure that the ASN will continue to perform its role as one of the world's leading safety authorities, sharing its work and its experience with its peers and promoting compliance with the principles of nuclear safety and radiation protection, leading to greater harmonisation of the rules for protection of people and the environment in the event of a nuclear accident.

Despite technical and organisational existing arrangements to prevent human and equipment failures, the possibility of a severe nuclear accident
that could result in transboundary radioactive release can never be ruled out. Furthermore, radiological emergencies of various types continue to occur in the world. Public authorities have a major responsibility in the protection of the population in case of accident. This article aims to specify the new french organization to respond to such emergency situations. This organization is based on a national emergency organization, emergency plans, trained staff which participates in periodic exercices, standards counter-mesasures to assure protection of the population. ASN as adviser of the government and the emergency operation director comments this organization.