Contrôle review #196: ASN report abstracts on the state of Nuclear Safety and Radiation Protection in France in 2012 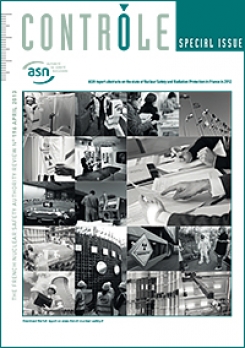 2012 was an important year for the development of nuclear safety in France. Following the Fukushima accident, ASN instructed the licensees to take steps to improve the robustness of the nuclear facilities, with a binding implementation schedule.

In terms of radiation protection, 2012 was characterised by continuation of the efforts begun several years ago to control the risks linked to the use of ionising radiation in the medical sector. The major radiotherapy accident in Epinal, brought to light in 2006, and the resulting trial in 2012, are a painful reminder of the stakes involved in this field.

The lessons from the Fukushima accident: the long-term view

Following the stress tests[1] performed in 2011 in the wake of the Fukushima accident, ASN considered that the facilities examined offered a level of safety such that there was no need to request that any of them be shut down. At the same time, ASN considers that their continued operation demands that their robustness to extreme situations be increased beyond their existing safety margins, as rapidly as possible.

The stress tests approach is being gradually extended to all the other facilities.

In agreement with the French High Committee for Transparency and Information on Nuclear Security, ASN made sure that social, organisational and human factors were included. ASN defined its priorities: maintaining and renewing skills, in particular at a time when one generation of workers is giving way to the next, the conditions for subcontracting in normal and in accident conditions, and the development of research on these subjects.

In June 2012, ASN set up the nuclear safety social, organisational and human factors steering committee (COFSOH), which is open to all the stakeholders: administrations, licensees, subcontractors, trades unions, experts, associations, etc. The first meetings of this committee led to definition of the programme of work to be initiated in 2013.

The Fukushima accident confirmed the importance of the work started by ASN in 2005, with all the stakeholders within the Steering committee for managing the post-

accident phase of a nuclear accident (CODIRPA). This work led to the November 2012 publication of the first elements of national nuclear post-accident doctrine. The CODIRPA will next work on accidents on a scale comparable to the Fukushima disaster and will define what steps to take in the field, with all the players concerned.

ASN underlines that the lessons learned from the Fukushima disaster go far beyond the specific Japanese context. It will take many years to fully analyse the accident, its management and what improvements need to be made to existing facilities and organisations, world-wide.

The French nuclear industry, whether reactors or fuel cycle facilities, was to a large extent built during the

These facilities experience ageing, which is mainly manifested by:

Maintaining a satisfactory level of safety over time therefore requires:

The ten-yearly safety review required by law is a key element of this approach. Following this review, ASN rules on the facility’s ability to remain in service.

For EDF’s 900 MWe nuclear reactors, ASN ruled in 2009 on the principle of extending operation beyond the thirty year lifetime, even up to forty years, subject to the result of the periodic safety review of each facility.

Operation beyond this lifetime would, from the safety viewpoint, require an examination of particular scope, taking account of the hypotheses and margins used for the 40-year design basis, operating experience feedback, improvements in current knowledge and the foreseeable changes to the safety requirements for the period in question.

The thought currently being given to the energy transition process must therefore take account of the uncertainty surrounding the lifetime of the NPPs, the strategic nature of which was underlined by the Government audit office in a public report of January 2012. ASN in particular underlines the need to ensure sufficient electricity production capacity, regardless of the origin, to be able to deal with the eventuality – which is always possible despite the precautions taken – of the simultaneous shutdown of several facilities for safety reasons.

Research: a key issue for ASN

Safety and radiation protection require technical and scientific expertise that must be regularly brought up to date. ASN thus gave itself the means to identify priority areas for research in this respect. An international scientific committee, set up in 2010, regularly examines the proposed orientations. On the basis of its recommendations, ASN issued a first opinion on 10 April 2012, concerning social, organisational and human factors, radio-biology, ageing of PWR metal components and non-destructive testing.

ASN is particularly preoccupied by two types of situations:

In radiotherapy, particular vigilance is required concerning the conditions for deploying and learning how to use highly complex new equipment as well as the development of new irradiation procedures enabling stronger and better targeted doses to be delivered to the tumour, but which require even more precautions.

The training of interventional radiology professionals in patient radiation protection needs to be strengthened, in order to optimise the doses delivered to the patients and minimise the risks of radiological burns.

With regard to repetitive or chronic exposure situations, a considerable rise in medical imaging doses worldwide can be seen, particularly in the most industrialised countries, in particular owing to the use of scanners and radiological screening. In order to control this rise, application of the justification and optimisation principles needs to be strengthened. In particular, the medical imaging examinations correct usage guide, which has been revised and is available on the Internet, will be promoted among doctors requesting examinations. At the same time, the MRI device pool must be expanded so that it can replace scanners for specific indications.

All these changes increase the need for medical physicists, owing to their essential role in optimising techniques and quality assurance, but also for development of the radiation protection culture. For several years now, ASN has pointed out that their numbers and their role need to be reinforced, including in medical imaging, where there is a significant shortage. The profession of medical physicist must be recognised, which requires regulatory clarification of the corresponding radiation protection and health care safety responsibilities.

With regard to exposure to naturally occurring radioactivity, radon can lead to a risk of lung cancer as a result of chronic inhalation. ASN is taking part in implementing the 2011-2015 national action plan built around five main pillars, in particular the reduction of exposure in the home.

Finally, the phenomenon of individual radiosensitivity, which is well-known to radiotherapists and linked to genetic anomalies in DNA damage signalling and repair, could also appear at lower doses. This could concern about 10% of the population, whose sensitivity to the doses received could be multiplied by a factor of up to 5.

With regard to the monitoring of radioactive waste management, ASN in conjunction with the General Directorate for Energy and Climate (DGEC), as part of a pluralistic working group, established the National Radioactive Waste and Materials Management Plan (PNGMDR) for the period 2013-2015, which was transmitted to Parliament in December 2012. The PNGMDR is an essential component of the waste management process, as its aim is to ensure that there are safe management solutions for each category of radioactive material and waste, to identify the foreseeable need for storage and disposal facilities and to define all the steps to be taken so that this need is met as rapidly as possible.

In this respect, ASN underlines the importance of the public debate on the project for deep geological disposal of high or intermediate level waste, programmed for 2013. This milestone is a key step in implementing a long-term management solution, in compliance with the safety objectives and the calendar imposed by the 28 June 2006 Programme Act on the sustainable management of radioactive materials and waste.

At the same time, ASN will continue to work with foreign safety regulators on the safety of such a disposal facility, in particular with regard to questions affecting reversibility.

Towards a harmonised international vision

For ASN, the construction of a European nuclear safety and radiation protection framework has always been a major objective. ASN is continuing its work, jointly with its counterparts, to harmonise safety requirements and promote the independence of safety regulators and transparency.

This harmonisation is based on the work being done by the Western European Nuclear Regulators’ Association (WENRA) and the Heads of European Radiological Protection Competent Authorities (HERCA). Thanks to this approach, the stress tests performed in Europe in the wake of the Fukushima accident, under the control of the safety regulators of the member States, are considered to be a global benchmark.

More broadly, ASN is heavily involved in bilateral relations around the world, or within NEA and IAEA. The next meeting of the international Convention on Nuclear Safety, to be held in 2014, will be an important one in the light of the follow-up to the Fukushima accident. André-Claude Lacoste, former Chairman of ASN, has been elected to chair it.

Monitoring nuclear safety and radiation protection requires that day-to-day actions be taken within the context of a more long-term view.

With a commission renewed in November 2012, seeing the arrival of Margot Tirmarche, Commissioner, and Pierre-Franck Chevet, Chairman, ASN is continuing its work in line with its strategic guidelines and in compliance with its values: competence, rigor, independence and transparency.

[1] Previously referred to in France as “complementary safety assessments” (CSA).

Contrôle review #196: ASN report abstracts on the state of Nuclear Safety and Radiation Protection in France in 2012