Contrôle review #194: ASN report abstracts on the state of Nuclear Safety and Radiation Protection in France in 2011 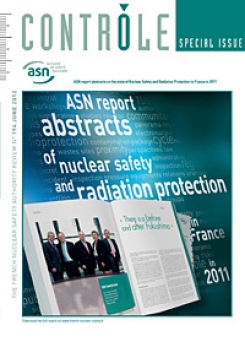 The Nuclear Safety Authority presents its Report on the state of nuclear safety and radiation protection in France in 2011.
This report is required by article 7 of the 13th June 2006 Act on transparency and security in the nuclear field, now integrated into the Environment Code (article L. 592-31).
It was submitted to the President of the Republic, the Prime Minister and the Presidents of the Senate and the National Assembly, pursuant to article 7 of the above-mentioned Act.

"There is a before and after Fukushima"

This is the fifth year running that the ASN Commission presents the annual report on the state of nuclear safety and radiation protection in France. It represents an opportunity to conduct a first review of these five years, before two members of the Commission, including the Chairman, are replaced at the end of 2012.

As in previous years, 2011 was relatively satisfactory in France in terms of nuclear safety and radiation protection. At the end of this five-year period, it is worth highlighting the progress made in the field of patient safety, owing to the rise in the number of radiological physicists and the tightening up of procedures. Also worthy of note is the progress achieved with regard to transparency, in particular thanks to the work done by the French High Committee for Transparency and Information on Nuclear Security and by the local information committees, as well as the publication by ASN of follow-up letters to all the inspections it carries out and of the opinions of the Advisory Committees of experts, which are an important factor in the decisions it takes.

The ASN Commission considers that there are a number of key issues and challenges for the next few years.

2011 was marked by the Fukushima accident. This major accident reminded everyone that despite all the precautions taken, an accident can never be completely ruled out. There is most clearly a before and after Fukushima, because this accident raises fundamental questions which go far beyond the specific characteristics of the Fukushima reactors and how they were operated. Full analysis of the feedback could take up to 10 years, but ASN immediately initiated a series of targeted inspections on topics related to the accident and a series of complementary safety assessments on the French civil nuclear facilities. These assessments are in response to the Prime Minister's 23rd March 2011 request for an audit of French facilities and that of the European Council of 24th and 25th March 2011, for the performance of stress tests on the European nuclear power generating reactors. ASN published its report, which was submitted to the Prime Minister and forwarded to the European Commission in early 2012.

Subsequent to the complementary safety assessments, ASN considers that the level of safety in the facilities examined is high enough not to require that any of them be shutdown. At the same time, it considers that their continued operation is conditional upon increasing their robustness to extreme situations, over and above their existing safety margins, as rapidly as possible. It therefore imposes a range of measures on the licensees. Furthermore, ASN considers that social, organisational and human factors are a key aspect of safety. It will thus be particularly attentive to the renewal of licensee staff and skills, as well as how the use of subcontractors is organised. All the steps taken and the opinions issued by ASN following the Fukushima accident are described in the "Fukushima: one year later" part.

A process of peer-review of the national reports, conducted at a European level, has already started and should continue until June 2012. ASN will draw its conclusions from the results of these peer reviews.

In order to improve safety worldwide, it is essential that there be complete feedback from the Fukushima accident and Europe must promote the stress tests approach and results internationally. A major step will be the extraordinary meeting of the Convention on Nuclear Safety, to be held in Vienna at the end of August 2012.

As part of the energy debate currently ongoing in France, ASN would recall that, whichever scenario is chosen, the safety of the nuclear facilities must be guaranteed in all circumstances, whether in terms of construction, operation or decommissioning. ASN will ensure that the necessary investments are made and that sufficient skills are maintained for all the scenarios.

It stresses the fact that were reactor operations to be continued beyond 40 years, this would require significant safety improvements, in particular with respect to severe accidents. It would adopt as its benchmark the safety objectives of the new reactors (EPR), taking account of the experience feedback from the Fukushima accident. ASN will require shutdown of those facilities unable to achieve the required level of safety. In this context, to avoid creating situations in which the demands of safety conflict with those of energy supply, it is crucial to be able to anticipate the renewal of electricity production capacity, whichever production method is chosen.

In the field of the regulation of radioactive waste management, 2012 will be devoted to preparing the new edition of the national radioactive materials and waste management plan (PNGMDR) (2013-2015), which is a key element in waste management because its aim is to ensure that there are reliable management solutions for each category of radioactive material and waste, to identify the foreseeable needs in terms of storage and disposal facilities and to define all the corresponding steps and measures to be taken. ASN considers that in terms of nuclear safety and radiation protection, it is essential that for each category of waste, there is a management and disposal solution and that this solution is put into place as rapidly as possible. ASN will ensure that the preparations for the public debate concerning the geological disposal project for intermediate level and high level, long-lived waste, which should take place in 2013, are carried out in the best possible conditions. Prior to the examination of the application file for such a disposal facility, it will continue to work on the subject of reversibility with its European counterparts.

After radiotherapy, ASN focused its efforts on medical imaging, which represents significant issues in terms of radiation protection of patients.

The performance of medical imaging, in particular computed tomography, is continuing to rise, leading to improvements in diagnosis quality, more precisely targeted therapeutic strategies and treatment under radiological visual control. However, this is also leading to a significant rise in the average dose per inhabitant, a trend that is being observed worldwide. ASN therefore considers that it is becoming urgent to take steps to control this rise in doses. In addition to increasing the number of MRI machines, it recommends working with the health professionals on reinforcing application of the principle of the justification of radiological examinations and with the equipment manufacturers on equipment optimisation. This is a subject on which it works together with its European counterparts within the Heads of European Radiological Protection Competent Authorities association, HERCA.

It also stresses the importance of continuing research into individual radiation sensitivity with a view to developing a detection test. It would appear that about 10% of the population is hyper-sensitive to ionising radiation, as a result of genetic anomalies in the signalling and repair of DNA damage, itself a factor in the onset of cancers. Individual radiation sensitivity would also seem to be responsible for serious undesirable effects observed in radiotherapy, even when no dose error is involved. A routine detection test would help ensure progress in radiobiology, radiation protection and cancerology.

The aim of achieving consistency between the radiation protection and security approaches (in other words the prevention of malicious acts) led ASN to suggest to the Government that it take charge of regulating source security, an area for which there was as yet no specific framework. The principle was adopted in 2008. An Act is needed to entrust this mission to ASN. The relevant provisions were included in a Bill intended, among other things, to ratify the ordinance of 5th January 2012 which codified the TSN Act. ASN has begun to set up an organisation to take charge of this new role.

Construction of a European nuclear safety and radiation protection area

For ASN, the construction of a European nuclear safety and radiation protection area has always been a major objective. The construction of this area has made progress, with the adoption of two European directives, one in 2009 on nuclear safety, the other in 2011 on the management of radioactive waste and spent fuel. The first European conference on nuclear safety was also held in Brussels in June 2011. The work done by WENRA, the Western European Nuclear Regulators’ Association, enabled the specifications to be rapidly drafted for the European stress tests conducted subsequent to the Fukushima accident. In the same way, work is progressing within HERCA on, for example, medical imaging. ASN will continue to heavily involved at a European level, so that Europe can discuss its positions with its American and Asian colleagues and promote them.

Faced with the challenges mentioned, in particular the need to improve the approach to safety in order to take account of the lessons learned from the Fukushima disaster, ASN will continue to carry out its role of regulating nuclear safety and radiation protection, while striving to strengthen the implementation of its four fundamental values: competence, independence, rigor and transparency. ASN will continue with its goal of improving nuclear safety worldwide. The quality of its own staff and the expertise contributed by those at IRSN are key factors in its success.

Contrôle review #194: ASN report abstracts on the state of Nuclear Safety and Radiation Protection in France in 2011