Contrôle review #193: The safety of transport of radioactive materials 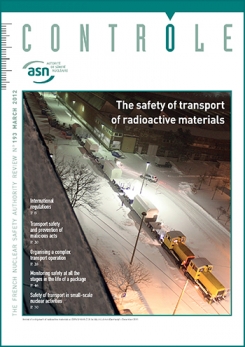 After 15 years of ASN oversight of radioactive material transport, and more than five years after its change of status, I wanted Contrôle to provide some enlightenment on the progress made in this area.

Since 12 June 1997, ASN has been responsible for monitoring the radioactive material transport regulations and overseeing their application. The first years were devoted to bringing the organisation of transport oversight closer to that for the safety of nuclear facilities, with the assistance of the IPSN (Institute of Nuclear Safety and Protection), which in 2002 became the IRSN (Institute for Radiation Protection and Nuclear Safety). A regional transport inspection system was set up, with the training of inspectors in the regional divisions of ASN. The INES significant events classification scale, initially devised for nuclear facilities, was extended to transport. The close cooperation with the IRSN was enhanced in 1998 by the setting up of an Advisory Committee of Experts in the transport of radioactive materials (GPT), which now meets two or three times a year at the request of ASN.

ASN now plays an active role with the International Atomic Energy Agency (IAEA) in the development of regulations, and cooperates regularly with its foreign counterparts. Lastly, transparency has become established in the other domains, with the systematic publication of the inspection follow-up letters on the web site www.asn.fr, and the development of initiatives aimed at the public, elected officials and the media, particularly for transport operations that attract high media exposure.

An initial assessment was drawn up in 2004, when the IAEA conducted the TRANSAS[1] audit mission. A second audit organised two years later confirmed that ASN had implemented the recommendations and suggestions resulting from the first audit.

The TSN Act voted in 2006, which is now integrated in the Environment Code, provided a more robust legal framework for ASN’s action. Today, nearly six years after its adoption, I consider that the provisions of this act have been implemented. The credibility of the ASN’s regulatory role has been considerably enhanced by the fact that since 2006, ASN and its inspectors can impose sanctions. The adoption of an order on the technical regulation of basic nuclear installations (BNI) in February 2012 is a major step in the renovation of the regulatory pyramid which will be completed with the publication of some fifteen ASN resolutions in the coming months. These technical regulations provide more specifically for a tightening of the requirements relating to the safety of transport within the BNIs.

This issue of Contrôle, over and beyond the abovementioned progress, aims to identify prospective actions for the coming years, both nationally and internationally.

Contrôle review #193: The safety of transport of radioactive materials