Contrôle review #191 : ASN report abstracts on the state of Nuclear Safety and Radiation Protection in France in 2010 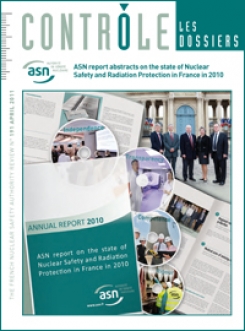 This ASN Report on the state of nuclear safety and radiation protection in France in 2010 is presented by a partly changed Commission. Jean-Jacques Dumont and Philippe Jamet, appointed by the President of the Republic and the President of the Senate respectively have, for a six-year term, replaced Marc Sanson and Jean-Rémi Gouze, whose mandates expired on 12th November 2010.

From the nuclear safety and radiation protection standpoint, 2010 was a relatively satisfactory year.

However, in the field of nuclear installations, ASN considers that EDF needs to improve its forward planning of a certain number of maintenance and component replacement operations. Belated decisions of this nature meant that EDF had to submit files to ASN to justify continued operation in degraded mode. These files were not felt to be acceptable by ASN from the safety standpoint. This type of management is neither efficient nor optimised, be it for ASN with regard to safety and the mobilisation of its resources, or for EDF. For example, the late replacement of the Bugey nuclear power plant reactor’s 3 steam generators, after the discovery of significant corrosion of one of them, led to a 20 month reactor outage.

The publication of the second edition of the national radioactive materials and waste management plan (PNGMDR 2010-2012) was one of the significant events of 2010. The draft European directive on the management of waste and spent fuel, which has just been proposed by the European Commission, reiterates that the elaboration of such a plan is one of its fundamental requirements.

In the field of small-scale nuclear activities, the progress made in 2009 in radiotherapy patient safety has been confirmed by the increased numbers of medical radiation physicists (PSRPM) deployed under implementation of the Cancer II Plan and by the gradual implementation of quality management procedures designed to improve healthcare safety. However, ASN must continue to closely monitor a certain number of centres, especially when the shortage of PSRPM personnel is compensated for by calling in external contractors or through collaboration between centres.

Interventional radiology, in other words radiology which helps guide the physician's hand, particularly in cardiology, neurology and surgery, is a subject of some concern for ASN. High doses can be delivered to the patients and the radiation protection of the staff is not always what it should be, especially when these procedures are carried out in the operating theatre. Finally, it is worth noting that ASN's relations with a certain number of medical learned societies are on the whole constructive, a clear sign of the level of maturity now reached.

After its inspections, ASN sends a follow-up letter to the licensee or the party responsible for the activity monitored, presenting a summary of the main findings and a certain number of requests for remedial action. After the basic nuclear installations (BNI) sector in 2002 and then radiotherapy services in 2008, the scope of the follow-up letters published was extended in 2010 to take in all inspections carried out by ASN.

For the coming years, the ASN Commission has identified a number of national and international issues.

Contrôle review #191 : ASN report abstracts on the state of Nuclear Safety and Radiation Protection in France in 2010