Annual report : Nuclear safety and radiation protection in France in 2010 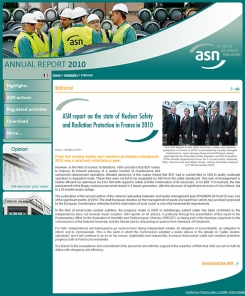 From the nuclear safety and radiation protection standpoint, 2010 was a relatively satisfactory year.

However, in the field of nuclear installations, ASN considers that EDF needs to improve its forward planning of a certain number of maintenance and component replacement operations. Belated decisions of this nature meant that EDF had to submit files to ASN to justify continued operation in degraded mode. These files were not felt to be acceptable by ASN from the safety standpoint. This type of management is neither efficient nor optimised, be it for ASN with regard to safety and the mobilisation of its resources, or for EDF. For example, the late replacement of the Bugey nuclear power plant reactor’s 3 steam generators, after the discovery of significant corrosion of one of them, led to a 20 month reactor outage.

The publication of the second edition of the national radioactive materials and waste management plan (PNGMDR 2010-2012) was one of the significant events of 2010. The draft European directive on the management of waste and spent fuel, which has just been proposed by the European Commission, reiterates that the elaboration of such a plan is one of its fundamental requirements.(...)