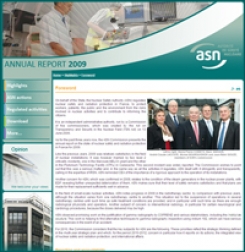 On behalf of the State, the Nuclear Safety Authority (ASN) regulates nuclear safety and radiation protection in France, to protect workers, patients, the public and the environment from the risks involved in nuclear activities and to contribute to informing the citizens.

It is an independent administrative authority, run by a Commission of five commissioners, which was created by the Act on Transparency and Security in the Nuclear Field (TSN Act) on 13 June 2006.

As for the past three years now, the ASN Commission presents the annual report on the state of nuclear safety and radiation protection in France for 2009.

Like the previous years, 2009 was relatively satisfactory in the field of nuclear installations. It was however marked by two level 2 criticality incidents, one in the Marcoule MELOX plant and the other in the Plutonium Technology Facility (ATPu) in Cadarache. This second incident was widely reported. The Commission wishes to point out that this was a serious matter and, in the same way as all the activities it regulates, ASN dealt with it stringently and transparently, calling in the expertise of IRSN. ASN reminded CEA of the importance of a rigorous approach to the operation of its installations.

Another concern for ASN, which was confirmed in 2009, relates to the condition of the steam generators in the nuclear power plants, with EDF revealing further unexpected deterioration of them. ASN makes sure that their level of safety remains satisfactory and that plans are made for their replacement sufficiently well in advance.

In the field of small-scale nuclear activities, ASN notes progress in 2009 in the radiotherapy sector, by comparison with previous years, although the situation varies from one radiotherapy centre to another. This situation led to the suspension of operations in several radiotherapy centres until such time as safe treatment conditions are provided, and in particular until such time as there are enough radiological physicists and operators. Another subject of concern is interventional radiology, in particular for certain neurological and cardiology procedures, because the doses delivered may be high.

ASN observed promising work on the justification of gamma radiography by COFREND and various stakeholders, including the Institut de soudure. This work is helping to find alternative techniques to gamma radiography inspection using iridium 192, which can have serious consequences in the event of an accident.

For 2010, the Commission considers that the key subjects for ASN are the following. These priorities reflect the strategic thinking defined in the multi-year strategic plan and which, for the period 2010-2012, concern in particular how it reports on its actions, the integrated view of nuclear safety and radiation protection, and international affairs (...)