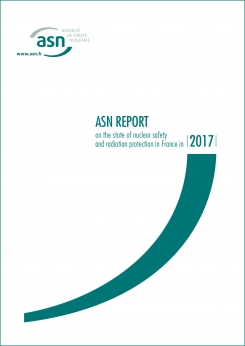 The Nuclear Safety Authority presents its report on the state of nuclear safety and radiation protection in France in  2017.

This report is required by Article L. 592-31 of the Environment Code.

It was submitted to the President of the Republic,  the Prime Minister and the Presidents of the Senate and the National Assembly and  transmitted to the Parliamentary Ofﬁce for the  Evaluation of Scientiﬁc and Technological Choices, pursuant to the above-mentioned Article.

A year that was on the whole satisfactory: a less worrying context, but several subjects requiring vigilance

The abstracts of the ASN Report 2017

In 2017, the safety of the operation of the large nuclear facilities and radiation protection in the industrial and medical fields remained on the whole satisfactory. However, with regard to the EDF NPP fleet, vigilance is required in the light of the difficulties encountered in the management of equipment conformity. In the medical sector, the persistence of level 2 incidents, more specifically in radiotherapy and during fluoroscopy-guided  interventions, also warrants reinforced oversight.

The general context would appear to be less worrying:

Unprecedented challenges face all the nuclear stakeholders. To a large extent, they were foreseeable:

There is another major issue: the lessons learned from the Fukushima Daiichi accident. This led to a large number of safety reinforcements on all French nuclear facilities; nonetheless major works will still be needed in the coming years.

Against this backdrop, ASN considers that vigilance is required to ensure that the operating safety of the large installations and radiation protection in the industrial and medical fields are maintained at a satisfactory level, with particular attention being paid to the detection of incidents, their notification and their processing, all of which are key factors in the continuous improvement of safety.

For the medium and long term, ASN has two messages:

In this context made complex by safety and budget constraints, ASN has overhauled its regulation and oversight strategy: its aim is to focus on areas producing the greatest benefit for the protection of humans and the environment, taking account of both the risks inherent in the activities and the behaviour of those responsible for them. Conversely, for situations considered to be positive, ASN must be able to explicitly scale back its regulation and oversight.

Over the past three years, ASN and IRSN were granted additional resources. ASN is fully conscious of the efforts made in this respect by the Government and by Parliament. However, it reaffirms the need for reforms in the financing of the regulation and oversight of nuclear safety and radiation protection, which would enable it in the future to have access to resources that could be easily adapted to its needs.

The abstracts of the ASN report 2017