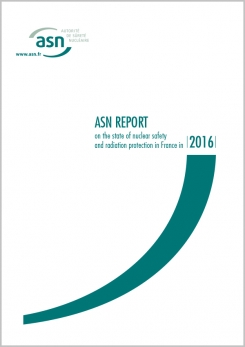 The ASN (Nuclear Safety Authority) Report on the state of nuclear safety and radiation protection in France in 2016.

This report is specified in Article L. 592-31 of the Environment Code.

It was submitted to the President of the Republic, the Prime Minister and the Presidents of the Senate and the National Assembly, pursuant to the above-mentioned Article.

The abstracts of the ASN report 2016

On the whole, 2016 was satisfactory despite a worrying context

The year was marked by the detection of a serious generic anomaly. Eighteen EDF reactors were potentially affected by excess carbon in the steel used in the manufacture of the steam generators. Specific checks were ordered by ASN on all these reactors and five of them had to be shut down early.

This is not the first time this type of generic anomaly has been found: for the French electrical system, it confirms the need to ensure that there is sufficient margin to deal with the shutdown of several reactors following the detection of a generic anomaly.

In addition, irregularities dating back to the manufacture of large reactor components have been detected in the Creusot Forge plant. Numerous design and manufacture conformity deviations were also found during the periodic safety reviews on the installations.

These findings mean that:

This complex situation must give rise neither to denial, nor to defeatism: denial of the scale and even sometimes the reality of the problems observed; defeatism which would discourage the completion of the necessary manufacturing reviews, or undermine the motivation of those involved in safety on a day to day basis.

This situation demands that both the consequences and causes of anomalies and irregularities be identified and dealt with: this is the absolute pre-requisite for consolidating nuclear safety.

Apart from these anomalies or irregularities, the operating safety of Basic Nuclear Installations (BNI) was on the whole maintained at a high level, although particular vigilance is still required in the field of radiation protection, particularly for the medical sector, in which four level 2 incidents occurred in 2016.

This assessment of 2016, with its positive and negative points, comes at a worrying time:

This worrying context must encourage all stakeholders to exercise the greatest vigilance to ensure that safety remains a priority. For its part, ASN will be attentive to the technical and financial capacity of the industrial firms, as well as to ensuring that they maintain in-house skills that are vital for safety. It will in particular ensure that the necessary safety investments are actually made.

The abstracts of the ASN report 2016