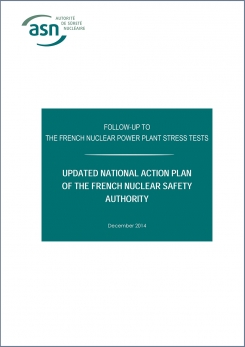 On 26 April 2012, one year after the Fukushima Daiichi accident, a joint statement by ENSREG[1] and the European Commission concluded the stress tests conducted on the European nuclear power plants. This statement emphasised the need to implement an overall action plan to ensure that these stress tests would be followed by safety improvement measures implemented in a consistent manner in each country.

The ENSREG global action plan provided for the nuclear safety regulator of each member country to publish a national action plan by the end of 2012. ASN published the action plan for France in December 2012[2]. The national action plans then underwent a peer review, which was concluded by a seminar organised by ENSREG, held in April 2013 in Brussels. For France, the seminar summary report emphasized in particular the comprehensive nature of the action plan presented, the importance that ASN attached to the transparency of the stress tests, the ambitious nature of the content and the implementation times for the measures to improve safety in the nuclear power plants decided further to the Fukushima Daiichi accident, and the taking into account of organisational and human factors, including subcontracting conditions.

Further to this seminar it was decided to assess the situation of implementation of the actions in each country after two years. ASN therefore updated its action plan applying the ENSREG recommendations. Two aspects have implications that are particularly important:

At the end of the stress tests, ASN underlined in its opinion of 3rd January 2012 that it was going to oblige the licensees to take measures to reinforce protection against natural risks (earthquakes and flooding) or risks associated with other industrial activities and control the accident situations that could result therefrom (loss of electrical power supplies, loss of heat sinks, severe accidents). These requirements oblige EDF more specifically:

The update of the ASN action plan on the follow-up of the French NPP stress tests and the synthesis table tracking the actions prescribed by the ASN resolutions of 26th June 2012 show EDF's progress with their implementation.

EDF has met all the regulatory deadlines of the resolutions of 26th June 2012, and has notably implemented the modifications they required for 31st December 2014, particularly with respect to the seismic risk, the flood risk, the limitation of discharges in the event of an accident, the maintaining of the water inventory of the pools in exceptional external hazard situations and the improving of the instrumentation.

In its opinion of 3rd January 2012, ASN also underlined that the social, organisational and human factors represent a key element of safety. The ASN resolutions of 26th June 2012 contain requirements in this area (improvement and reinforcing of operator training, consideration of intervention conditions in emergency situations, consideration of the psychological pressure on the persons intervening in these situations, etc.). ASN has moreover set up a pluralistic working group on these subjects called the COFSOH (Social, organisational and human factors steering committee). This committee has held six plenary meetings since 2012. The meetings have addressed the following subjects: conditions of subcontracting and relations between the ordering customer and subcontractors, the relationship between "managed security" and "regulated security", management of skills in a context of staff renewal, and the evaluation of the organisation or the use of appropriate Human and Organisational Factors (HOF) indicators to assess safety.